Co-authored by Leanne Wirkkula
Special thanks to Garry Sanders, SAIL Leadership Fellow, for his thoughtful insights on this article.

The academic department is often the unheralded powerhouse of a college or university.

The benefits of a higher education range from increased earnings to enhanced happiness to better health. More and more jobs require an advanced education and the US is not on track to produce the number of college-educated workers predicted to be needed in the future. The innovation that drives the economy increasingly comes from labs and workshops on college campuses. And, the quality of life in communities is a direct result of activities of colleges and universities.

In each case, the responsibility for advancing this work falls to our academic departments and the faculty that comprise them. It’s difficult to have a strong college or university without healthy and vibrant academic departments. From a perspective of organizational effectiveness, it is important for senior leaders to understand and support the critical role that departments play in producing and driving an academic culture of quality, innovation and entrepreneurship across an academic institution.

In many ways, academic departments are to universities what mitochondria are to cellular organisms. Each cell is full of these little entities called mitochondria, which collectively are responsible for regulating the metabolism of the cell through respiration and energy production. In the same way, academic departments serve as the regulators of an institution’s metabolism — they ultimately determine whether an institution operates at peak performance or not. They’re both powerhouses!

An institutional culture of quality and innovation begins in a well-run, well-managed, well-led academic department. When a department is chaired by a vibrant, visionary, strategic academic leader who knits together the department’s program offerings and overall agenda with its faculty expertise and the disciplinary cutting edge, quite often the result is innovative research, insightful academic offerings, and a general sense of academic synergy that burnishes the department’s and the institution’s reputation. The college and the institution benefit more from a collection of productive departments rather than a few shining stars.

When departments are well-run, the institution’s vision and reputation develops organically and more easily cultivated as a genuine reflection of the college or university. Conversely, when the majority of academic departments are stagnant and academic chairs are “serving their turn” or otherwise simply administering the department rather than actively leading it, the institution often struggles to nurture innovation, and programs of all types are viewed as average (if not significantly behind the curve in relevancy and quality). It’s in this institutional climate that top-down declarations of identity and planning (which can feel contrived and inauthentic) tend to be developed and pushed down from the administration–because it’s not bubbling up from the departments in sufficient quantities.

Yet, at many colleges and universities, the leadership of the academic department continues to resemble that of early 20th century. Essentially, a member of the faculty, with little to no training in management or leadership, assumes responsibility for “heading” the department for a limited period of time before either advancing up the administrative hierarchy or returning to the faculty. In both cases, another novice manager is selected to take care of the department.

What’s in a Job (Description)?

Clark Kerr, the former president of the University of California, once described the modern university as a “series of individual faculty entrepreneurs held together by a common grievance over parking.” Most colleges and universities can no longer afford to be comprised of a series of non-connected faculty entrepreneurs. While it is important to celebrate and support the creativity and work of faculty, we also need to find ways to harness this work in a way that collectively benefits students, communities, and the institutions where they work. The position most well suited for that is the department chair.

Importance of the Department Chair

The department chair has been one of the most important and underappreciated roles at a college for decades. As Walzer (1975, p. 6) noted in his seminal study of the department chair, “the academic department is where the action is” and warned that “the job of the academic …[chair] must not be underestimated by the [college] administration, the faculty members, or those who hold or seek the job.”  At some institutions, department chairs can collectively make up to 80% of the administrative decision given their front-line role in hiring, advising, course scheduling, faculty development, and so forth. Yet, few institutions of higher learning have thought through or invested in the professional development of those faculty who the institution trusts to fill such important roles.

The disconnect between expectations of departments and training of department chairs to lead their departments was evident in a recent survey we conduct around college use of predictive analytics to support student success. This is a relatively new and rapidly developing effort to use “big data” to distill knowledge about students in a way to improve advising, teaching, and learning efforts. The respondents to the survey indicated that academic departments were the most important unit for implementing these efforts. When asked how they were building the capacity of departments and department chairs to address these efforts, no campus reported any effort. In essence, the responsibility was falling to the department chairs, but no one was supporting those individuals to gain new knowledge or otherwise build their capacity to move forward these change efforts.

Also relevant is the significant impending turnover in the number of faculty that higher education will likely experience in the next decade. It’s been well documented that faculty have been putting off retirement, but that now seems to be changing. This suggests that many academic departments will be navigating significant change as their workforce turns over.

In 2011, the Bureau of Labor Statistics estimated that one third of the faculty workforce was over the age of 55, this compared to an average of 20% in other professions. As of the fall of 2017, 16% of the faculty workforce across SUNY’s four-year campuses was over the age of 65.  This amounts to more than 3,200 faculty members. In fact, nearly 40% of faculty are over the age of 55, meaning that approximately 7,200 of SUNY’s 20,000+ faculty are likely within a decade of retiring, which is likely reflective of the larger national profile.

Such turnover presents colleges and universities with a rare opportunity to have departments seriously reflect on their profile and how they want to evolve in the future. Are their department chairs up to the task?

Who are our Academic Department Chairs?

Gathering data on department chairs can be difficult as the roles have a high turnover rate and it’s generally considered a temporary title given to a faculty member, leaving HR databases often incomplete. Within SUNY, we are able to identify those individuals who receive a “chair stipend” at our 4-year campuses. This group, while not a complete representation of the population of chairs, is comprised of 518 people across 29 campuses.

The average chair in SUNY is a white, 55 year old male. Somewhat surprisingly, the average age of the chair has remained almost the same for the last 15 years, likely representing more recent promotions to full-professor. Also surprising is that chairs remain overwhelming white, with 88% of chairs classified as white, non-Hispanic. One area where we have seen change is in the proportion of women in chair roles, which is now 40.5%, an increase of 125% from 2002-2017. (View enlarged infographic.) 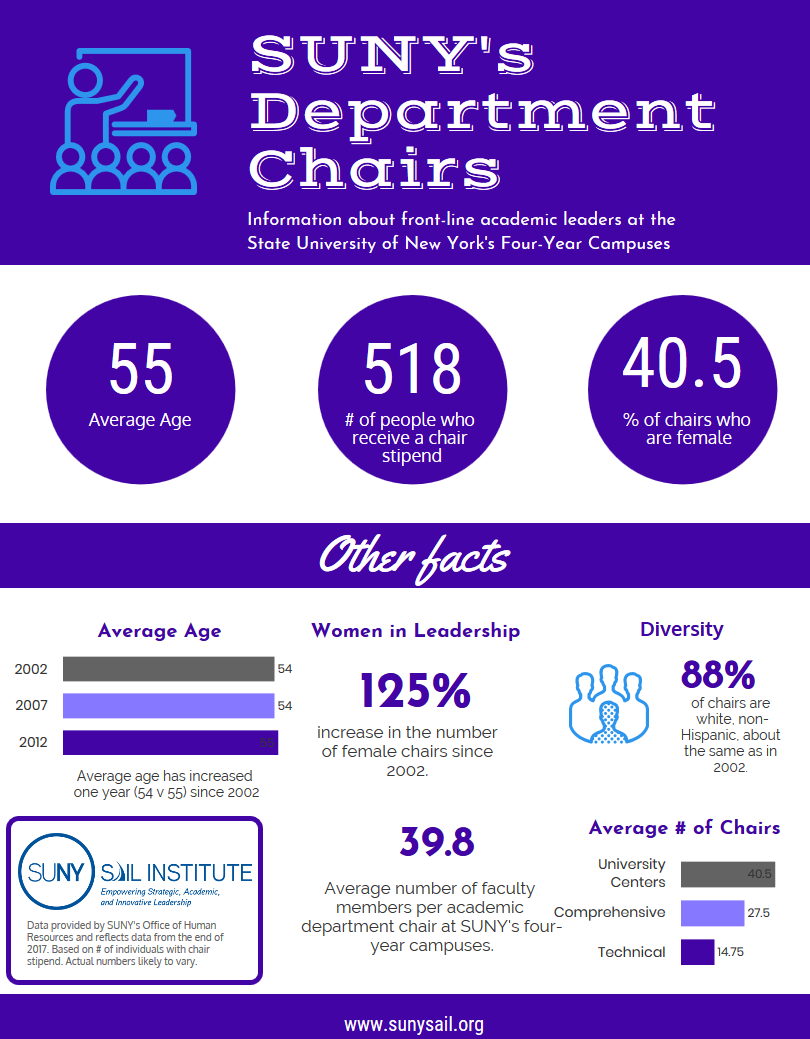 Very likely as the professoriate diversifies, so will the role of the chair. This is important as new ideas and understanding of the academy will become part of the leadership pipeline. It is also important to think carefully about how to support those in these roles. The department chair is typically the beginning of the academic leadership pipeline. If those roles are not diverse; it is near impossible to expect more senior-level roles to diversify.

The Need for Leadership Development

Nearly every college and university is looking to improve student success, grow enrollments, increase research productivity, improve community relations, and advance their distinctiveness in the student and/or disciplinary marketplace. Academic departments are the key to making process in each of these areas. Yet, without good leaders, how can we expect our academic department to lead the change that campuses need?

In the same way that good department chairs, select, mentor and grow their faculty, deans and provosts should be carefully selecting, mentoring and growing their department chairs. The most successful colleges and universities are those that cultivate a culture of excellence at the departmental level – having department’s lead the way, rather than being led by the upper administration. This requires good leaders…and good leaders are made.

As boundary spanners, chairs exist as the first line between the faculty and the administration. They still retain their faculty responsibilities while also engaging in the administrative function of the university. In this important role, they bring some level of alignment between the faculty and the administration. However, we know there is a firehose of discordant communications occurring at both unit and institutional levels in university life. This is challenging because it can lead to lack of clarity in departmental strategy development and execution.

To be most effective, the role of the department chair should be approached from the level of institutional ownership, and they should feel empowered that they are part of the overall leadership team for the university. Very often, the role is framed as one where the individual keeps their head down and keeps the department “on track”, but we also need individuals who can lift up their heads to see what is happening around them and making sure the department is responding effectively and pursuing opportunities.

What is needed are chairs that understand the six domains of knowledge for higher education leaders. 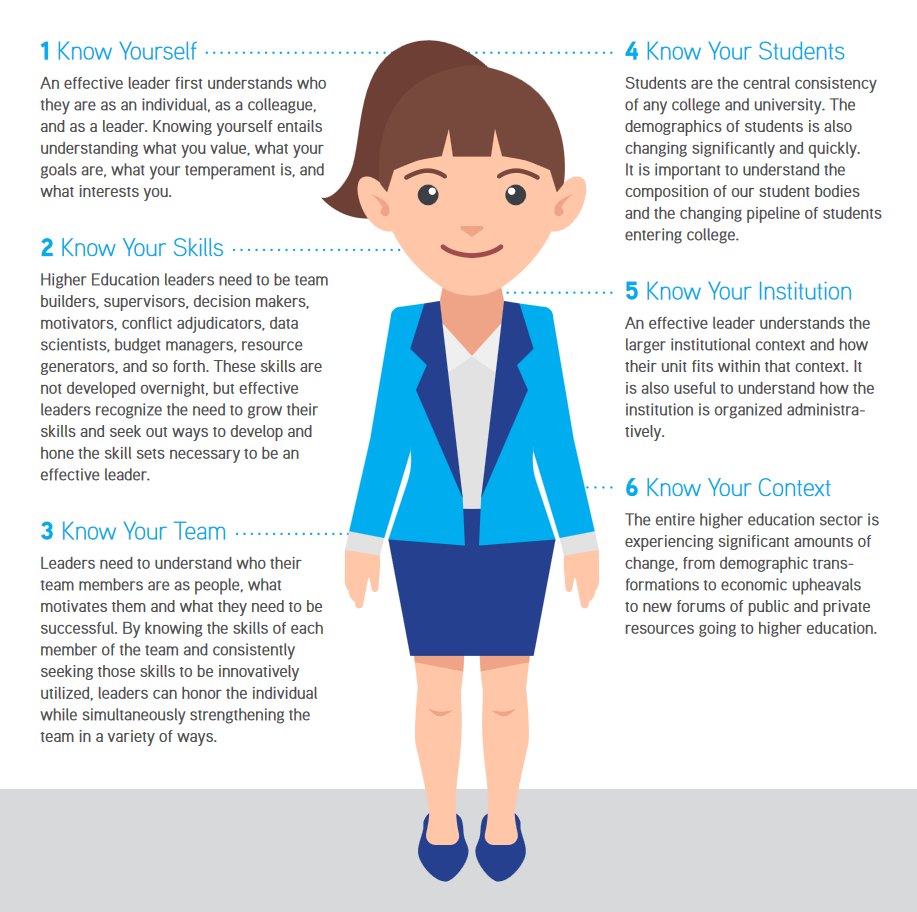 These are a quick snapshot of what department chairs need to know (View enlarged infographic.). But, they are unlikely to pick them up on their own. Colleges and universities need to invest in preparing these critical leaders to effectively advance the powerhouse of the academic enterprise.